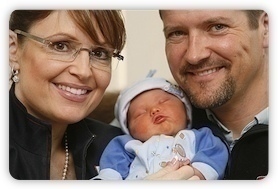 Speaking of Leftist hatred for Sarah Palin, pro-abortionist wackos are so incensed by her decision to bring her Down syndrome baby into the world that they’re making donations to Planned Parenthood in her name as a way to protest. Rod Dreher reproduces one of the chain emails going around:

Dear Friends: We may have thought we wanted a woman on a national political ticket, but the joke has really been on us, hasn’t it? Are you as sick in your stomach as I am at the thought of Sarah Palin as Vice President of the United States ? Since Palin gave her speech accepting the Republican nomination for the Vice Presidency, Barack Obama’s campaign has raised over $10 million dollars. Some of you may already be supporting the Obama campaign financially; others of you may still be a little over the primaries. None of you, however, can be happy with Palin’s selection, especially on her positions on women’s issues. So, if you feel you can’t support the Obama campaign financially, may I suggest the following fiendishly brilliant alternative? Make a donation to Planned Parenthood. In Sarah Palin’s name. And here’s the good part: when you make a donation to PP in her name, they’ll send her a card telling her that the donation has been made in her honor. [emphasis added]

“Fiendish” is right. Such mean-spirited and awful actions can only be inspired by the one who also goes by the name of Moloch, the Canaanite god to whom babies were sacrificed.

The Divide between Trump’s America and Biden’s America