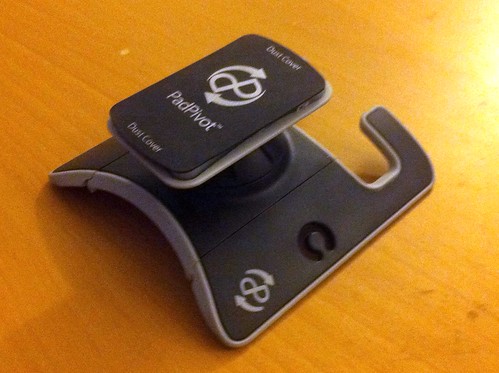 Today I received my first Kickstarter project to result in an actual product. If you’re not familiar with Kickstarter, it’s a unique way of providing seed funding for entrepreneurial projects that would otherwise never see the light of day. Let’s say you have a great idea for a new beer-fetching robot. You get together with an engineer friend and you come up with a design, you build a prototype, and you work out the kinks. You’re ready to build your new robot, but it costs tens of thousands of dollars to buy the raw materials and hire a factory. In the past, you would go to your friends and family to chip in, you’d mortgage your house, and if you were lucky you got a bank loan or venture capital investment.

But Kickstarter allows you to crowd-source your production costs. With Kickstarter, you put your project online and you tell the story. You set a dollar amount to raise and deadline to raise it by. Then you offer a return on investment. Say, for $50 you get a robot t-shirt; for $100 you get a robot; for $175 you get two robots; for for $500 you get your name engraved on the side of your robots, etc. If the project gets fully funded by the deadline, you go to production. If not, nobody gets charged any money and you move on.

The great part is that the inventor can gauge if he really has a market for the device and if demand is high he can raise a lot of money. Some projects have raised 10 or 100 times more money than the initial request.

I’ve backed several projects on Kickstarter. I’ve backed the recording of a new CD by jazz-folk singer Burke Ingraffia, who I went to Franciscan University with. For $10, I get digital downloads of the tracks on the date of the CD release. I’ve also backed coffee joulies, an ingenious product that immediately cools coffee to the right drinking temperature and then keeps it there for an extended time. I recently backed Red Pop, a gadget that attaches to an iPhone and works as a shutter button. It interacts with an iPhone app to make picture-taking better. And then there’s the one I got in the mail today.

The PadPivot works with my iPad or Kindle or even my iPhone to do several things. When I’m sitting on the couch, it’s has a nice curve so it fits right over my thigh, keeping the iPad secure and positioned so I can use it. The Pivot comes with an elastic cord to secure the Pivot to my leg if I want to be extra-safe. The PadPivot can also hold my iPad on the desktop in either portrait and landscape orientation. Yet it folds up into a small portable size. The PadPivot holds onto the back of the iPad with a non-slip dust cover, but if I want extra security, the dust cover peels off and there’s a sticky yet re-usable surface to grab it. I wouldn’t use in a car on a bumpy road without a hand holding the iPad, but for all normal use it’s great. On the couch, on the plane or a bus or train, in an auditorium, laying in bed—all great uses for the PadPivot.

So I’m excited not just to use the PadPivot, but also because I had a hand in bringing it to market and learned a little bit about what it takes to create such a product. It’s the great American story. 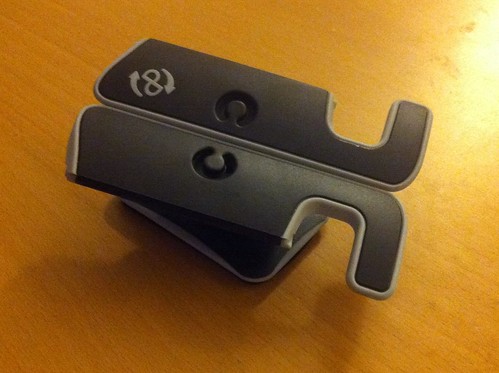 The PadPivot, folded up and upside down 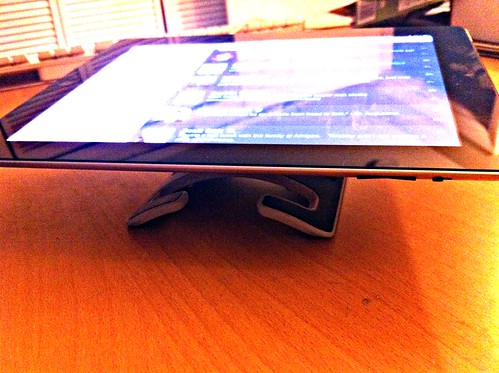 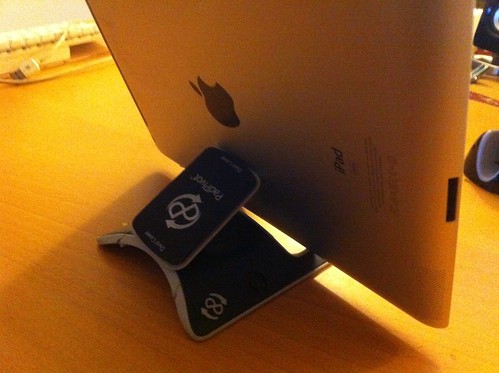 iPad on the PadPivot as a desk stand. 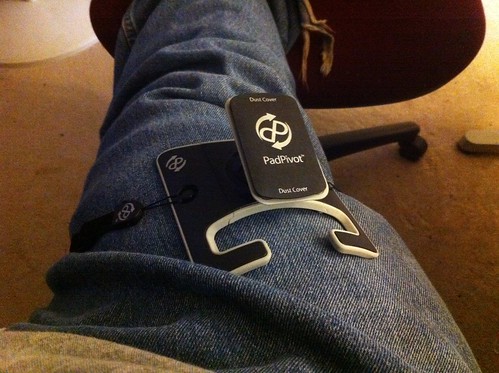 Bare PadPivot strapped to my leg 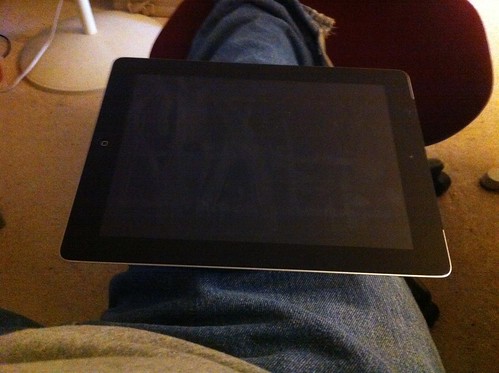 iPad on PadPivot strapped to my leg

(At this point, you may be asking where you can buy one. They’re now accepting pre-orders on the PadPivot website.)