Lawmakers angry at being held accountable 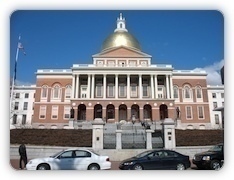 Democrat House lawmakers in Massachusetts are mad at their leadership because they’re being forced to vote on a same-sex marriage bill in an election year.

“He has no concern for the members,” said one legislator, who requested anonymity. “This is stuff we should be dealing with in the first year (of the session). It’s a lose-lose for anyone facing a challenger.”

Let that sink in for a second. Despite their claims, the politicians admit that the same-sex so-called marriage is so unpopular with the voters, even in liberal Massachusetts, that they don’t want to be held accountable for their vote. Instead they’d prefer to expand it into the rest of the United States, but only if they can do so when they have the maximum possible time to let voters forget. Or they could emulate their craven Senate brethren and just hold a voice vote so as to avoid being counted in the crowd.

These are your legislators, ladies and gentlemen. Cowards.

The fact is that they know that if they let democracy actually work, they would never be able to push their re-engineering deconstruction of society forward. This is why they also hide behind legislative tricks and gimmicks to avoid allowing a popular referendum on a constitutional amendment. It’s the traditional disdain for the average voter inherent in the liberal worldview. They see all of us as so bigoted, so stupid, so incapable of doing the “right” thing— as they envision it—that they must circumvent our right to self-governance and impose the solutions of a minority on the majority. We don’t live in a democracy nor a constitutional republic anymore. We are ruled by oligarchs who blind us with bread and circuses, or to use a more updated phrase, earmarks and pork-barrel spending.

The good news is that the legislators are feeling the pressure and are worried that going on the record today will affect their electoral chances in November. It means that constituents are contacting their legislators. Some representatives’ offices are reporting that calls, emails, and letters are coming in 6-1 against the bill that would repeal a 1913 law that keeps Massachusetts from spreading her errors.

(The law makes it illegal for out-of-staters to be married in Massachusetts if the marriage would be illegal in their home state. Homosexual lobbyists make much of the fact that the law’s original intent was to prevent “miscegenation” or mixed-race marriages. Whatever the original intent of the law, it’s effect today is to prevent out-of-state homosexuals and lesbians from getting marriage licenses in Massachusetts and then suing back home by invoking the “full faith and credit” clause of the US Constitution. The clear propaganda goal here is not just to repeal the law, but also to create the mental equivalence in the minds of the public between race and sexual preference.)

Uber Deception on the Benefits of Congestion Pricing