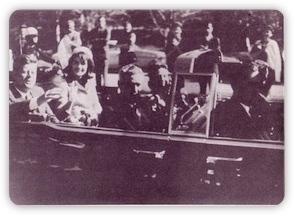 The headline says “New JFK findings debunk single-gunman theory”, but that’s not what the story says.

Cliff Spiegelman, a professor of statistics at Texas A&M University, said that five bullet fragments taken from JFK’s body could have come from more than the two bullets which are said to have cut down the president in Dallas in November 1963.

“The claim was made that those five fragments could only have come from two bullets,” Spiegelman said. “Our research showed it could have been two or more.

The study does not say there were two or more gunmen, only that the single-gunman theory can’t be supported by science. [emphasis added]

To debunk something is to prove it false. If you prove false the theory that Lee Harvey Oswald was the lone gunman, then you must be saying there were two or more gunmen. There is a big difference between “could” and “must”. As the italicized words in the quote show, Spiegelman was saying “could”.

Seems like a case of an oversensationalizing headline writer. After all, if it seems to say that there was definitively more than one gunman, that’s a huge story. But that’s not the story here.

The Lone Pundit and the Archdiocese of Boston