The Super Bowl is here 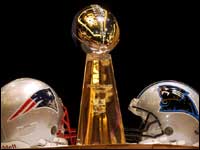 I know I haven’t written much about this over the past couple of weeks, but believe me, I’ve been reading every article, listening to every radio show, watching every TV program in preparation for the Patriots’ second Super Bowl trophy. (fingers crossed)

I’m still amazed that so many people are picking the Carolina Panthers to win this. The Panthers, while a good team, beat a passel of second-rate teams to get here, and St. Louis gave away the win in the first week of the playoffs. For the Patriots to lose, they have to screw it up badly. Brady would have to throw a half-dozen interceptions or the Pats would have to give up several fumbles. Carolina has to play a perfect game and despite their vaunted running game, the Pats have been stopped every top-flight running back they’ve seen this year. Only Clinton Portis gained more than 100 yards in a game.

So much for my analysis. Here’s how I’m going to watch it. My brother-in-law Pete and I have a tradition of borrowing a room at my parish’s school (It used to be the teen drop-in center) and we set up an LCD projector, connected to cable TV and show it lifesize on a white sheet hung on the wall. The sound plays through a set of computer speakers with a subwoofer for the lifelike sound. There are a bunch of old couches in there set up stadium style and the place will be decorated in Patriots style. There’ll be some foode launched into a vitriolic diatribe against pharmaceutical companies. He spoke of the “genocidal action of the drug cartels who refuse to make the drugs afforable in Africa even after they reported a $517 billion profit in 2002.”

If that were the whole story we’d be right to join in Fr. d’Agostino’s outrage. But of course it isn’t.

I received information from someone who works for one of the top 3 biggest pharmaceutical companies in the world. He’s not a PR flack or marketing guy. He works in the trenches there and was very upset that he and his colleagues were being accused of genocide and putting profit before the lives of the sick.

Here is what he said:

1.  There are no/few profits in Africa.  We offer our medicines at “no
profit” prices. In some cases companies are selling below cost. In others,
the medicines are available on a steeply discounted basis.

2. The companies are engaged in multi million dollar assistance programs.
It’s quite possible that in many countries in Africa, companies are
operating at a net loss.

3. Father “Dag” has a view that companies hold patents that block copycat
(cheaper) drugs. But this is not true.  For instance, for the 319 drugs on
the WHO’s Essential Drug list, if you look at the 52-53 African countries,
these drugs are 99% of the time not patented if you look at a given product
in a given country. In the case of Kenya, half the AIDS drugs were NEVER
patented, and 100% of these drugs are available on steep discount. I attach
two studies, here:

[Editor: He attached two files: One a reprint of an article for the December 17, 2001 issue of the Journal of the American Medical Association entitled, “Do patents for retroviral drugs constrain access to AIDS treatment in Africa?” and the other an abstract from a talk given at an AIDS conference by a Harvard research entitled, “A Quantitative Analysis Of Patents And Access To Essential Medicines In Developing Countries.”]

4. In some instances the companies are donating medicines—Pfizer’s
diflucan program. Boehringer Ingelheim’s nevirapine program. Merck’s program
in Botswana, where we donate our two HIV medicines.  The prices that the
companies are offering to Africa and other low development countries are
highly competitive—or significantly lower than copycat medicines. Merck’s
STOCRIN is a clear example—much lower in price than copycat versions, but
for the original quality product— that’s why MSF purchases from us in
Kenya.

5. Father Dag and the Vatican are right to ask for the world to do more, but
they are wrong to blame drug companies for not doing enough.

This is part of a much bigger story about AIDS in Africa. For example, a lot of very large numbers are thrown around about the size of the AIDS problem in Africa. There’s no doubting there’s a problem, but how big is it really? And are some people using the epidemic to enrich themselves or advance certain political agendas? In a future issue of Catholic World Report we’ll be investigating this story. If you subscribe now, you’ll be sure not to miss it. (Blatant plug alert!)