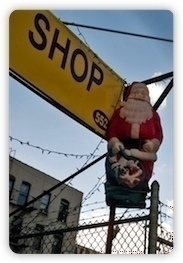 There are so many things wrong with this New York Times story that tells us the sob story that mothers are having to sacrifice buying designer jeans so their kids can have more stuff this Christmas. Yes, my dad tells me tales of his mom forgoing designer fashions during the Depression; it was such a hard time for everyone.

The article starts with this anecdote of a woman who is buying her daughter a mess of Christmas presents, but will have to forgo the designer jeans she wants to buy herself. (Click through to see the photo of the Christmas gifts for her daughter.) Then it tells us that the economy is so bad that “for millions of mothers across the nation, this holiday season is turning into a time of sacrifice.” No, they’re not worrying about whether they can put food on the table, heat the house, or even keep a roof over their kids’ heads.

Weathering the first severe economic downturn of their adult lives, these women are discovering that a practice they once indulged without thinking about it, shopping a bit for themselves at the holidays, has to give way to their children’s wish lists.

We’re so steeped in our consumerist lifestyles, so obsessed with buying stuff we don’t need and can’t afford that being unable to buy stuff for ourselves at Christmas is considered a major sacrifice.

“I want her to be able to look back,” Ms. Hunt declared, “and say, ‘Even though they were tough times, my mom was still able to give me stuff.’”

Right, because what really endures for kids is the memory of the stuff your mom is able to buy you.

Note, too, that there’s no mention of a dad for Ms. Hunt’s kid. But the Times doesn’t forget them, being quick to point out that it’s moms who are enduring this horrible burden of being unable to buy stuff themselves the most. Yes, because dads don’t sacrifice. Nope, in our culture, it’s only moms who really sacrifice. Dads just go to work and then go out drinking with their buddies and go play golf and then plop themselves in front of the TV. They don’t sacrifice anything.

In what world is being unable to buy something for yourself during your Christmas shopping any kind of sacrifice? I guess in the world of the yuppies that the Times considers its audience.

And if our economy is dependent on people buying stuff for themselves they don’t need and can’t afford, then maybe it’s time for a little shakeup and a re-ordering of priorities.

Just a little thought to share with you all on this Black Weekend (formerly known as Thanksgiving weekend or the First Sunday of Advent).