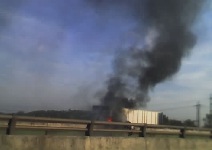 There we were, driving along the highway when we saw the tractor-trailer on fire.

Melanie and I were driving up to my brother-in-law Pete’s sister’s house to pick up some furniture we bought from her. We had just traveled up the northbound side of Route 495 in the Haverhill/Lawrence area no more than 45 minutes previously and as we were traveling southbound we saw smoke off to the left beyond the trees in the median and traffic was just starting to slow down. As we got closer I could see the flames. A tractor-trailer had crashed on the northbound side on a bridge. The cab was twisted to the left, had smashed through the railing, and was hanging over the open space. The cab was fully engulfed in flame as the fuel tanks had clearly caught fire. The fire trucks must have only just arrived.

I wish I could have caught the image of the actual truck dangling but I was trying to drive too. As we drove on, we thought of how close we were to being in that accident. A few more minutes dawdling with my nieces and our whole lives could have changed. We prayed for the people involved, especially the driver of the truck, and thanked God for all the bad things that don’t happen to us that could.