This year marks the 150th anniversary of my parish’s church. While Immaculate Conception parish in Salem, Mass., was founded in 1826, the current church itself was built in 1857 and dedicated in January 1858. This makes it the oldest parish church in Massachusetts, with a Mass celebrated every Sunday for that century and a half. Only St. Augustine chapel in South Boston’s Catholic cemetery is older.

Next Sunday, Cardinal O’Malley will be coming to Salem to celebrate Mass with us at 11 am to mark the occasion. Here’s a description of the Dedication Mass in 1858, taken from Origin of the Catholic Church in Salem and Its Growth in St. Mary’s Parish and the Parish of the Immaculate Conception by Fr. (later Bishop) Louis S. Walsh, written in 1890. (Bishop Walsh was a native of Salem and later became bishop of Portland, Maine.)

The first Dedication of the Church of the Immaculate Conception took place on Sunday morning, January 10, 1858, and seems to have been accompanied with all possible solemnity, as it was the “greatest Catholic ceremony” yet seen in Salem or in Essex County.

The weather was remarkably fine for the season. Long before the hour fixed for the ceremony, the church, excepting the aisles and vestibule, was crowded, and a still larger number of persons remained outside. Many were present who had witnesses the Dedication of Old St. Mary’s in 1832, and a few of these are still living in our parish. Many Protestants came, and were treated with great courtesy and attention, the best seats in the church being cheerfully offered to them. The doors and aisles were guarded and kept open by a delegation from the “Father Mathew Temperance Society” and the “Irish Reading-Room Association,” whose members marched in procession to the church.

In a short preliminary instruction, Father McElroy, S.J., of Boston, explained to the very attentive hearers, the nature, order, and design of the Dedication Ceremonies, and thus rendered them more interesting and impressive. Then, from the sacristy, came the cross-bearer, between two acolytes; next in order several altar-boys, seven or eight priests, dressed in cassock and surplice, the Right Rev. Bishop Bacon, D.D., of Portland, and finally, accompanied by deacon and subdeacon, and arrayed in cope and mitre, Right Rev. Bishop Fitzpatrick, D.D., Bishop of Boston, “whose imposing presence” attracted the especial attention of the congregation. The procession moved down the middle aisle to the outside main door; and after a short prayer by the Bishop, continued around the entire edifice, while the Pontiff sprinkled the walls, and the clergy chanted the penitential psalm, “Misere.” The circuit being made, and a second prayer recited, the procession entered the church; and when all had reached the sanctuary, the clergy and choir chanted solemnly, in Latin, the “Litany of the Saints,” during which the Bishop invoked upon the church and altar “the special blessing” of God, and thereby dedicated it to His honor, under the title of the “Immaculate Conception of the Blessed Virgin Mary.” A third prayer was then chanted, and the procession moved around the outer aisles of the interior, while the Bishop sprinkled the walls with holy water, and the chant of “psalms of joy” resounded through the sacred edifice. When the sanctuary was reached, a last and beautiful prayer was chanted aloud by the Bishop, and the solemn Amen, closed the Benediction rite.

The doors of the church were then opened to the throng of people outside, and in a few minutes, every available spot was occupied by no less than three thousand persons.

Here is a photograph of the original high altar in the church, after it was finished in later years. This photo was taken about 1905 and was featured on a Confirmation certificate. The pastor at the time of the photo was Father Timothy J. Murphy. Ironically, the present pastor is also named Timothy J. Murphy! 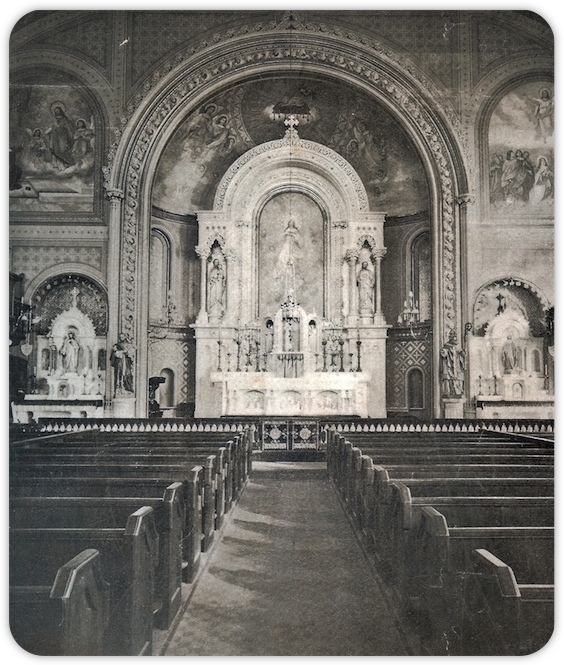 Why Transparency in the Church Matters

The Lone Pundit and the Archdiocese of Boston

Kicking Old Ladies to the Curb and Catholic Values

Reporting Systems are Fine; What We Need is Strong Leadership